Skip to content
Samsung is about to officially reveal its new Galaxy M51 smartphone: in the meantime, real photos and technical specifications have been leaked.

The Galaxy M51, the mid-range smartphone that Samsung is preparing to launch, appeared a few hours ago on the Google Play Console with some key specs

Apparently, according to what a page on Google Play Console reports, the new mid-range Galaxy M51 from the South Korean giant will present a screen with Full HD + resolution (2400 × 1080 pixels), will hide the Snapdragon 730 processor under the hood ( paired with 6/8 GB of RAM), an Adreno 618 GPU and will run Android 10.

The Galaxy M51 page that appeared on the Google Play Console also reveals – without giving any indication – that the launch is closer than ever, as the development of the terminal is entering its final stages. 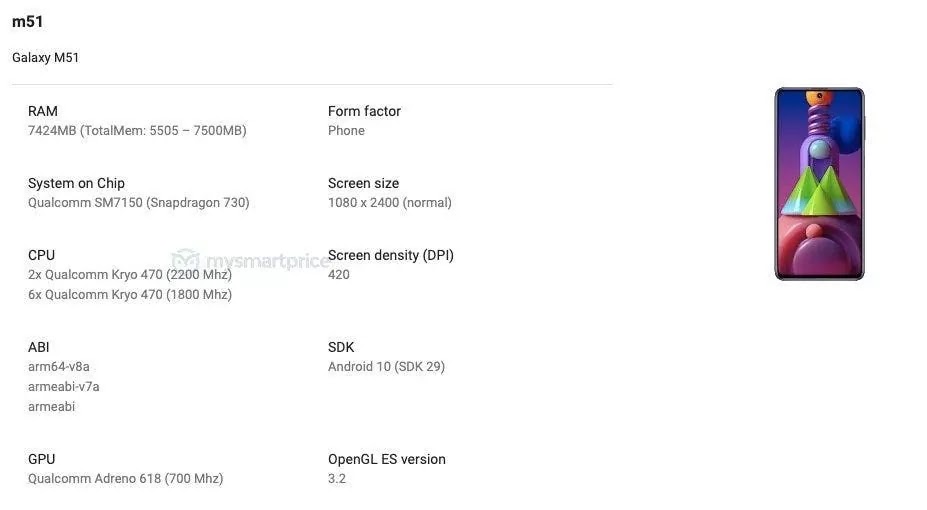 In the power autonomy department, the Galaxy M51 will boast a large 7,000mAh battery, which will have room for fast charging up to 25W, via a USB Type-C charging port.

Unfortunately, the page on the Google Play Console does not indicate it has an effective date for the presentation or the price of the terminal, but we believe that it will be updated in due time: we just have to wait for more details.