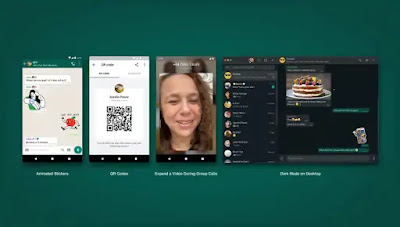 New features for WhatsApp, the world’s most used instant messaging service, continue to come. Expected at the end of many innovations against us.

WhatsApp, owned by Facebook, has been actively testing many new features for a long time. Many of these features have been officially announced recently. Company officials will offer new features over the next few weeks through a blog site ranks as follows:

Animated Stickers: Stickers are one of the fastest popular ways of communicating via WhatsApp. Billions of stickers are sent every day. As WhatsApp, we are launching new animated sticker packs. These stickers, which make it easier for you to express yourself, are now even more fun.

QR codes: We make adding new contacts easier than ever. Very soon, when you meet someone new, you will be able to scan the QR code and add it to your contacts. You no longer have to enter phone numbers one by one.

Dark mode for WhatsApp Web and Desktop: The extraordinarily popular Dark mode theme is now available on your computer.

Improvements to video group call: Now we make it easier for you to focus on the person you want in video calls, where eight people can join at the same time. You can enlarge it to full screen by holding down the video of the participant you want. We’ve also added a video icon to group chats with 8 or fewer participants. So you can easily start a video group call with a single tap.

The status feature is now also available on KaiOS: KaiOS users can now enjoy this popular feature, which allows you to share updates that disappear after 24 hours. These remarkable new features are said to be available with the latest versions of WhatsApp in the next few weeks. In this respect, users need to be patient.

WhatsApp recently made a sound with a Brazilian-based situation

WhatsApp is constantly gaining new features, and the newest is the Brazilian -based launched money-sending feature. This feature, which will be opened in other countries in the coming period, allowed people to send money directly to their friends or companies in the application to remember briefly. This remarkable feature has not been able to survive for a long time-based in Brazil, and the  Central Bank of Brazil decided to turn it off. The system that walks through Facebook Pay has been closed for now, as it maintains a competitive payment process and creates a security concern.