Skip to content
Samsung has just formalized the new Galaxy M01s, an entry-level smartphone equipped with an Helio P22 MediaTek processor and a 4000 mAh battery. 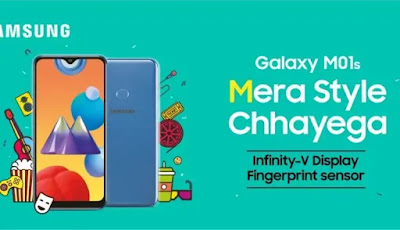 The new entry-level smartphone from Samsung, the Galaxy M01s, has just been launched in India with two rear cameras and a battery with a capacity of 4000 mAh. The selling price? Only 9999 RS.


Galaxy M01s: entry-level but with style

The Galaxy M01s was launched in India as heir to the Galaxy M01. The South Korean OEM budget phone brings numerous updates from the previous iteration; among these, we point out a physical fingerprint for the security of your data, the Dolby Atmos system for a better audio experience, and more.

The cheap phone from Samsung is equipped with a selfie cam housed in a drop notch, having an 8 Megapixel sensor inside. The on-board processor is the MediaTek Helio P22, a chipset designed for the low-end market.

The device shows a double color ready to purchase (blue and gray); you can buy it at official Samsung retailers (obviously in the markets in which it is distributed) or in offline telephony retailers.

The display is a 6.2-inch Infinity V HD + unit with TFT technology; RAM instead consists of a 3 GB module and the available storage is 32 GB, expandable via microSD up to 512 GB. The phone has a custom OneUI Android operating system.

As for the onboard optics, we find a double lens, the main one of which has a 13 Megapixel resolution and the secondary one is a 2 Mpx for photos with arrival bokeh. The phone is only 7.8 mm thick and the battery that powers it all has a capacity of 4000 mAh.

We do not know if the device is destined to cross Indian borders; to get more information about it, we just have to wait for the next few weeks.