The gaming division of the Taiwanese giant Asus has recently presented new keyboards for players who love to play games online and offline from PC. ROG (Republic of Gamers) has in fact presented the new 68-key wireless mini-keyboard called ” ROG Falchion “.

According to the information leaked on the official portal of the company, the new periphery is equipped with 68 keys, a wireless connection, supports Cherry MX technology, and customizable RGB lighting for each button. The battery life of the same, then, seems incredible: over 400 hours of use before it can be discharged (this value refers to the lighting off, however). 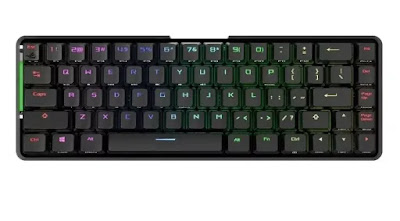 Very interesting the Touch Bar (no, not that of Apple laptops) called ” interactive touch panel “; it is nothing more than a capacitive strip that can be used for volume adjustment. That’s it. To connect to the computer, ROG Falchion uses the 2.4G Wi-Fi network with official response times of less than one millisecond. The launch price is unknown for now; We will keep you posted.