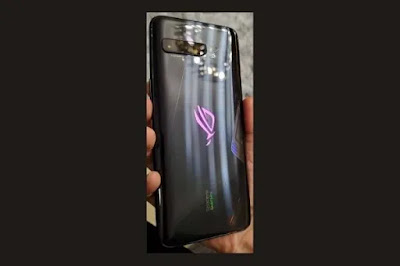 The first real image of the new Asus gaming flagship emerges on the net. The ROG Phone 3 begins to show itself shyly online; the indiscretion comes directly from a post published on Weibo, the Chinese microblogging portal.

The Taiwanese flagship will openly challenge the gaming-phones currently on the market (and future ones): Black Shark, Nubia, Razer, and all the other players that will come on the market ( Lenovo Legion Moba among all).

After making the first appearance on TENAA this week, Asus ROG Phone 3 is getting closer and closer; now check a photo, shared on Weibo, showing the official back cover of the device. As per philosophy, the device will boast a widely personalized and exclusive aesthetic; obviously – the ROG (Republic Of Gamers) logo lit by RGB LEDs that can be managed using the on-board software. Towards the bottom of the product, there is also the emblem of “Tencent Games”.

Following what TENAA reports, Asus ROG Phone 3 should be equipped with a FullHD + display with 6.59-inch AMOLED technology and 144 Hz refresh rate. The fingerprint scanner is placed – as always – under the display.

Under the hood, there would be an “overclocked” version (pass the term) of the Snapdragon 865 from Qualcomm, combined with 16 GB of RAM and 512 GB for internal storage.

On the photographic side instead, the smartphone could have three sensors in the back cover, whose main one would boast a 64 Megapixel resolution. We will jointly find an ultra-wide and a telephoto lens that will act as a sensor for shots with active bokeh. Complete all a 13 Megapixel selfie camera on the front panel.

The battery instead, should ensure performance worthy of the best portable console; with an amperage of 5800 mAh, the hours of intense online (and offline) play are guaranteed; you can play your games at COD Mobile or PUBG Mobile with complete peace of mind, even during train travel or during waiting hours in long queues at public bodies.

There will be support for Fast-Charge and Android 10 will certainly be a ready-to-use operating system. Owned customization Asus ROG to complete completely.