Skip to content
After obtaining a key certification in China, the next Galaxy Watch has reappeared in the FCC database: here are all the details.

The next Galaxy Watch the Samsung appeared on the FCC, the federal agency in charge of regulating communications in the United States. This means that the launch of the wearable is close enough.

After obtaining a key certification in China, the next Galaxy Watch has popped up in the database of another regulatory agency, namely the US FCC. In the institution the model numbers SM-R845 and SM-R855 have appeared, which correspond to the LTE variants, while the Wi-Fi-only models – which have not yet been exhibited on the FCC – should be identified with SM-R840 and SM- R850.
Turning to the details revealed by FCC, the documents include a drawing of the back of the smartwatch, confirming a circular design with a 45 mm stainless steel case (for the larger variant), Gorilla Glass DX, 5ATM, and MIL-STD-810G, as well as GPS and LTE connectivity. Although the certification body only talks about the stainless steel variant, according to rumors the Galaxy Watch should also come in aluminum and titanium. 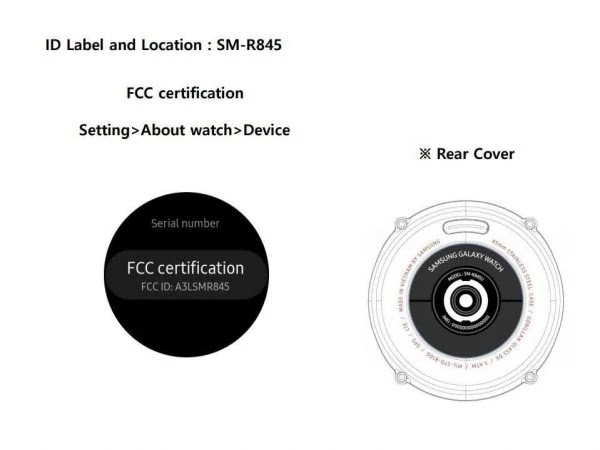 As for the official name of the next South Korean giant’s smartwatch, the presence of the only Samsung Galaxy Watch name on the image could reveal that the device is presented with this name – and not Galaxy Watch 2 or Galaxy Watch 3 as it is supposed -. Recall that the smartwatch next-generation Samsung will come with 8 GB of built-in memory and a battery of 330 mAh, which represents a big step forward in termino internal supplied.
In all likelihood, the new Galaxy Watch could be officially launched together with the long-awaited Galaxy Note 20 range, given that the Asian company generally presents its wearable devices every year along with a flagship smartphone. In addition, we also expect Samsung to launch the Galaxy Tab S7 during the same event, which is expected to take place in August.
If you liked the article, do not forget to share it with your friends. Follow us on Google News too, click on the star and choose us from your favorites.
SOURCE