Skip to content
According to a user on the Reddit portal, Google mistakenly sent 10 units of Pixel 4 to a buyer.

due to an error by Google customer service, ten units of Pixel 4 were delivered to a buyer. The event was as unusual as it was incredible that it led the user to report the incident on Reddit.

Imagine for a moment that you are a potential Pixel 4 customer . You go to the Google Store online site, choose the color of the device you want, the storage capacity, proceed with the processing of the order, pay … and voila! Order processed. Now all you have to do is wait for the courier in the following days.

Ten Google Pixels for the price of one

The day of delivery finally arrives: they ring the intercom and you are faced with a huge box. Considering that the size of a smartphone is relatively small, even with all the packaging connected, you ask yourself several questions: “ Will they have the wrong package? Did I make a mistake in selecting the product and chose a mega plush from the Google robot? Did Google want to check me out? Yet it is not April 1 … I mean, it’s been a month now … For Carnival no, even that has been over for too long. What will there be? “

Once the initial skepticism has been overcome, the courier invites you to take the parcel and sign the receipt, as its delivery is still long and cannot remain to watch your thoughts on the maximum parcel systems sent to you by Google. Close the door, arm yourself with a utility knife, open the box carefully (the fear of a bomb becomes more and more present and pressing), and … surprise! Not one, not two, not three, but ten Google Pixel 4.

Now is the time for laughter: the hysterical, nervous one, repressed after minutes of total disbelief and perplexity, mixed with a right dose of anguish for the contents of the box itself. Immediately after, take a picture, send it to all your groups of WhatsApp: ” LOL, 10 Google Pixels for the price of 1. It’s my lucky day “. In the grip of the euphoria of the moment, share the shot on social media, posting your story on Reddit. 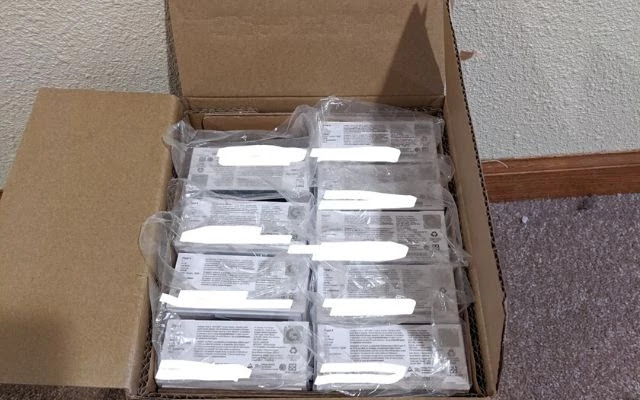 This is probably what the user “ timias55 ” will have thought and done, the protagonist of the story, and of the likely story we have created. For a brief moment, the man confessed to wanting to keep all ten phones to himself, but it would have been like scamming. After a quick consultation with his wife, the customer contacted Google customer service in order to report the unpleasant (pleasant for him) happened, even if, according to reports, the operator would have made a mistake again by reporting in the delivery note only 8 devices for returning to the company, and not 9 as they should have been.

Beyond the nice story, know that it is not the first time that a customer orders a device from the Google Store and finds multiple units of the same product, all brand new, packaged, and never opened. Even Google is wrong, in short, but most likely some employees will now have a little gratitude to “timias55” for the honesty shown.