New images and leaked settings from Samsung ‘s Galaxy Fold 2 show that the device is configured to have a larger screen and a faster refresh rate. The leaked renderings appeared on Ben Geskin ‘s Twitter profile (@bengeskin) who shared two new images on his social network account.

(render based on latest leaks) pic.twitter.com/TK8Ex9XvYU

The renderings show the back and the front of the device. The front is very similar to the original device (Galaxy Fold), but with a much larger screen than the previous model. As for the rear, the smartphone has a set of cameras very similar to that found in the Galaxy S20 series of devices.

The Galaxy Fold 2 apparently has two front cameras. The one on the outside is right in the center, while the one on the inner screen is on the right side of the device, being part of the display itself.


Regarding hardware specifications, Fold 2 should come with a 120Hz update screen. It will also feature the ultra-thin glass (UTG) that debuted with the Galaxy Z Flip. 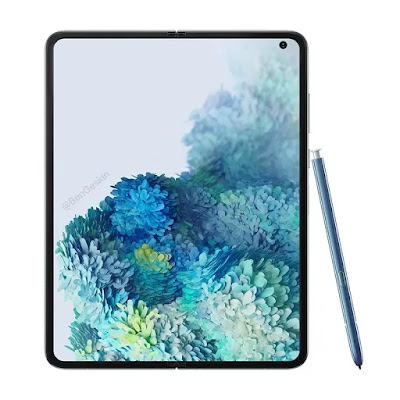