Skip to content
Intel has just formalized its 10th generation of Core processors aka Comet Lake-S. From Celeron to Core i9, with up to 10 cores and clock frequencies up to 5.3 GHz. A total of 32 processor references for PC towers. 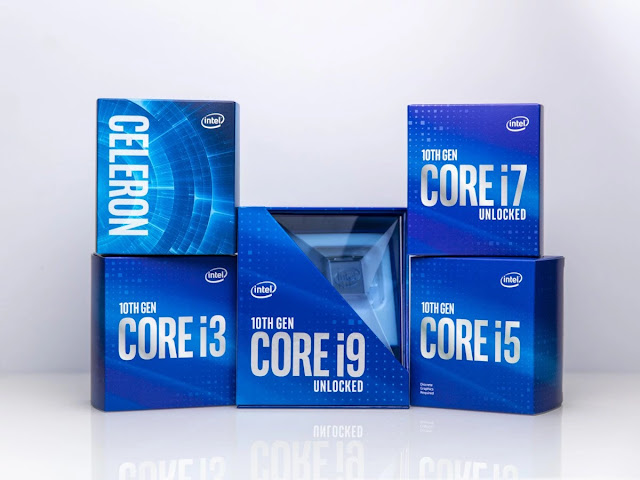 This tenth generation of Intel Core was expected, 32 references are coming to the market. They are still using Comet Lake, the fifth iteration of Skylake microarchitecture built on Intel’s 14nm ++ process, at a time when the competition is using 7nm engraving processes with sixteen cores. Besides, Intel uses a 10nm process for its Ice Lake chips on laptops.

32 PROCESSOR REFERENCES FROM CELERON TO CORE I9

Concretely, Intel announces 32 new processors with higher clock frequencies: from Celeron with a TDP at 35 W to the Core i9 with ten cores with a TDP of 125 W. Intel has generalized the Hyperthreading on Core i3 processors, i5, i7, and i9, and there are some models with F variants without integrated graphics chip (GPU UHD Graphics 630). Note also the native support for DDR4-2666 memory and, for some processors, DDR4-2933 memory.

The American media have posted the list of 32 processors with their characteristics and their prices. Depending on your needs, you will look at the number of cores, the clock frequency, or even energy consumption. There are huge differences between the $ 42 Celeron G5900T and the $ 488 Core i9-10900K (K means the CPU is unlocked for overclocking). For comparison, the Core i7-10700K (8C / 16T clocked at 3.8 GHz basic and 4.70 GHz in Turbo Boost mode) should normally be a little faster than the current Core i9-9900K.

Not all Turbo Boost is created equal: Turbo Boost 2.0 is the most basic boost technology, but there is also Turbo Boost Max 3.0, which was found on the Core X HEDT and which arrives for the Core i9 and Core i7.

As you can see in the tables, the references that bear the letter T are low-power processors, such as the Core i9-10900T. This processor has a TDP of 35 W and a base frequency of 1.9 GHz, but the turbo model allows us to mount all the cores up to 3.7 GHz and therefore to go beyond the announced TDP. The Pentium and Celeron are also present, they are all dual-core, but the Celerons do not have hyperthreading.

These new processors also take advantage of new chipsets, the Z490, B460, and H410 of which we do not yet know all the details. We will update this article when we have prices in Europe and more information.