After an endless series of missteps and quarters in red that, in fact, have led her to a role now irrelevant in the mobile sector, HTC would still plan to return to the market during 2020 with a new smartphone: the Desire 20 Pro.

According to LlabTooFeR, an insider who in the past has always anticipated information that turned out to be exact on HTC, the Desire 20 Pro would look very much like both the OnePlus 8 and the Xiaomi Mi 10. From the first, he would borrow an edge to edge display with a hole for the front camera. The rear part, instead, would use a multi-camera configuration arranged as on Xiaomi’s Mi 10.

However, this smartphone will not be a top of the range. Inside, in fact, there should be a “dated” Snapdragon 660 supported by 6 GB of RAM. A benchmark in the Geekbench database would confirm the presence of Android 10. Compatibility with 5G networks would be excluded 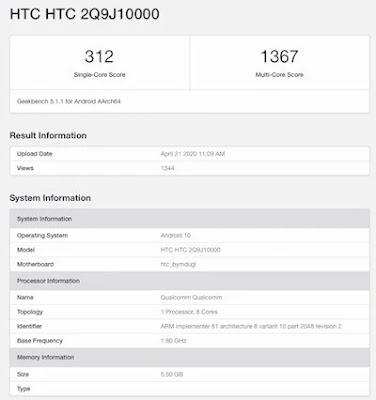 A mid-range device, therefore, for a company that has represented so much for the mobile sector in recent years but which has gradually lost its identity. This time, starting from the bottom, it could prove to be a better choice for HTC given the strong competition and the significant saturation of the markets.