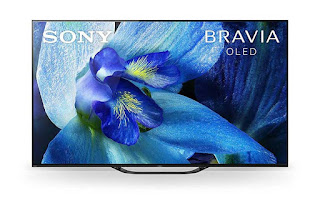 The sony OLED A8G 4K TV: Sony Bravia TV  let’s call it Sony’s mid-range OLED TV for 2019 it replaces the A8F from 2018 it has a newer LG panel and some styling changes, since last year but it has the same acoustic surface technology and runs Android OS.

So, let’s go over a few of the key specs. The Sony OLED A8G TV has two USB and four HDMI ports, two of which are full bandwidth which supports 4k HDR of the 60 frames per second.

And the other two HDMI 1 and 4 only supports 4k HDR at up to 30 frames per second.

So, your console won’t output an HDR signal if it’s connected to either of those ports HDMI 3 has the Audio Return Channel it also supports HDR 10, Dolby vision, and a hybrid like a gamma HLG HDR formats.

It has a pop-up in the top right-hand corner to let you know exactly what kind of HDR signal the TV is getting, and displaying.

I like that more manufacturers are doing this because then you don’t have to wonder if and what kind of HDR signal your TV is receiving.

The design is modern and looks good it’s surrounded by dark metals and plastics and looks like a slab of the screen.

When The Sony OLED A8G TV is turned off the stand is reversible.

So, the TV can either sit low on your entertainment center or higher.

So, you can place a soundbar in front of it and not be obstructed. I opted for the lower configuration.

Let’s move on to the operating system and one of the first parts of a TV. I feel that Sony intentionally held back on the TV runs Android OS.

So that means that it has all the apps that you could want available in the Google Play Store. More than just apps when it comes to the usability of the TV.

Which is sluggish and not as user-friendly it makes navigating things like menu and doing simple things like accessing the settings, more of a chore than it needs to be speaking of navigation.

Sony OLED A8G comes with the old remote. This needs the light upside to communicate with the TV.

And even needs an included IR blaster cable to be plugged into the back of the TV to control your cable box.

I honestly thought they retired this remote but nope. Here it is the only saving grace of this remote is that it has absurd cut buttons for Google Play, and Netflix, and is also voice-enabled.

So, you can use the built-in microphone for searching and using the built-in Google assistant but I don’t want this review to be just me complaining about things.

That I think Sony skimmed out on because of this Sony OLED A8G TV still has a lot going for it the built-in acoustic surface sound, the technology which uses actuators behind the screen sounds great for internal sounds some of the best you’ll hear from any TV.

It doesn’t sound as good as an external sound system mind you. But it works well for those times when you want to watch TV but don’t need to surround sound dialogue is full and clear.


And the sound has a surprising amount of low-end response for TV speakers.

And there’s something to be said about the Sun appearing to come directly from the people speaking on screen it’s pretty cool then there’s the picture it’s an OLED TV.

So, it’s self-emissive which means that each pixel on the screen produces its light, and is able to be controlled individually.

So, it doesn’t need a backlight and because of that, the TV is really thin. And the contrast it produces and the overall picture is great.

Upscaling 1080p and Lora’s content is something that Sony does very well and that’s no exception with the Sony Bravia OLED A8G cable TV and other videos looked great on TV. though not as good as native 4k material but still very good.

The TV comes with a bunch of picture modes. Which varies from the accurate cinema and cinema home modes to brighter and more saturated.

ones like the vivid picture preset among other watching movies on this TV was great.

And I didn’t notice any issues with motion processing like a blur or each other or any panel uniformity issues.

I did notice though that the TV wasn’t as good at displaying highlight detail as other TVs I’ve tested.

Now since the OLED panel doesn’t get as bright as an LCD TV.

Then, the TV relies upon tone mapping to display the HDR scenes with a higher peak brightness that the TV can support natively.

And there were several occasions in both test scenes using the spirit of mon-sol benchmark disc and test videos.

Where the inch they are told mapping didn’t maintain as much highlight detail as there should have been you can actually see this in some of the scenes of the comparison with the mini LED TV from TCL.


That I did that wasn’t enough to be distracting or probably not something I or anyone else would even notice without using a point of reference or a test image but that’s what I observed.

The TV has a game mode which is for lack of better words plain especially when compared to other 2019 TVs it has an input lag of about 30 milliseconds in a game mode.

So, it’s not bad by any means but it’s not excellent either especially since there are TVs out there with input lag in the low 20s.

And even teens but that being said ten or so milliseconds aren’t something that you’ll notice in actual gameplay.

But as far as response time goes it’s on the highest side of 2019 TVs.

I mentioned earlier that not all the HDMI ports are full bandwidth so even if you connect say an Xbox one next to either HDMI port 1 or 4 then you won’t be able to get an HDR signal from it. even if the game is in 4k HDR at 60 frames per second Str games work fine though.

so, that’s what your console will default to if it’s connected to either of those ports.

the picture in game mode is again another saving grace it’s vibrant without being oversaturated and contrasted without crushing details in the motion of the shadows.

Handling in-game mode was as good as any other TV I’ve seen this year there were no others or motion artifacts on the edges of objects at any point.

I’ve been thinking about how to really summarize my thoughts about this TV. And all that’s coming to mind is that the TV has a great picture of one of the best viewing experiences out there.

But then that picture is wrapped in a ball of okay. If this is your only experience with a Sony Android TV then you might not see what the big deal about the OS is.

But if you’ve used any other modern Sony TV then you know exactly what the difference is.

So, who is this TV for well if you want an older TV with a great picture that’s not an LG and the Amen G is out of your price range and you’re okay?

But the compromises that this TV makes then you might want to take a closer look at it?

I think both those TVs. I mine should do pretty much everything this one does and does it better, but they aren’t for everyone. 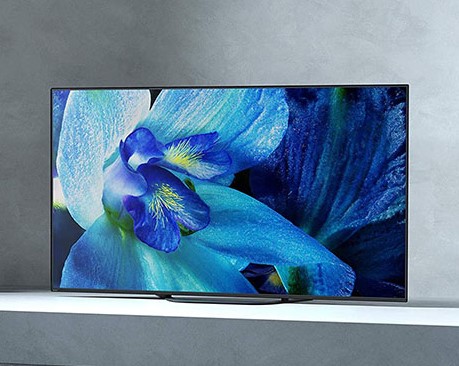